Small Cabin Community Rises in The Woods of N.Y. For A Weekend Retreat

29 Sep Small Cabin Community Rises in The Woods of N.Y. For A Weekend Retreat

Five years ago, Zach Klein, a successful tech entrepreneur then in his late 20s, was living in New York City but dreaming of the wilderness. A former Eagle scout, partner at CollegeHumor, and founder of Vimeo, the elegant online video platform, he was in between ventures, teaching entrepreneurship at the School of Visual Arts and spinning cycles, as he put it, while looking for land to buy — a lot of land — upon which he hoped to spend time building things and reconnecting to the scouting skills of his childhood.

Most urgently, he hoped he could persuade his friends to come along for the ride.

Mr. Klein got lucky in Sullivan County, N.Y., where he found 50 acres of forest with an understory of ferns and mossy boulders, lightly accessorized with a rough-hewed, one-room shack free from plumbing and electricity and a separate sleeping porch perched on a steep hill overlooking a rushing stream called Beaver Brook.

The property belonged to Scott Newkirk, a New York designer, and much of its appeal lay in Mr. Newkirk’s aesthetic: His shack and porch were lovely enough to have been featured in New York magazine. After 10 years there, Mr. Newkirk was ready to move on, and for about $280,000, Mr. Klein had found his utopia.

Beaver Brook, as he named it, inhabits a nexus of themes: a millennial’s version of the Adirondack camps of the robber barons, the back-to-the-land movements and intentional communities of the 1950s and ’60s, and a combination folk school/artists’ residency. 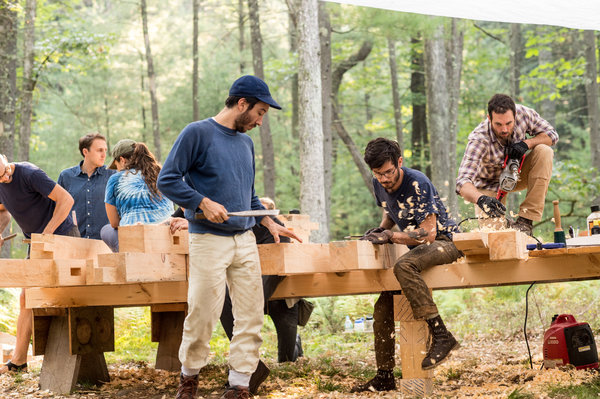 While hedge funders tend to express themselves in ever-bigger shingled simulacrums of early 20th century waterfront estates, those in the tech world who’ve enjoyed similar success may be more interested in experience, community and relationships, as Lane Becker, a founder of digital start-ups and the author of “Get Lucky,” a tech business primer on serendipity, pointed out.

“To the extent they want to spend their money, it’s on stuff like that,” he said. Mr. Becker and his wife, Courtney Skott, a furniture maker, were in Denver last weekend for a wedding, staying with a couple — a start-up entrepreneur and a television producer — who had rehabbed a Masonic Lodge. “They Airbnb some of the rooms out,” Mr. Becker said, “less because they need the money but because they’d like to get know different people. That’s sort of the model of what Zach’s doing. Some might see a sort of hipster-twee affectation, but I think there’s a more genuine impulse at work.”

Mr. Klein’s inspirations are familiar: the writings of Stewart Brand, the ’60s era eco guru and editor of the Whole Earth Catalogue; and John Seymour, the author of “The Self-Sufficient Life and How to Live it, ” along with the architectural ideals of Christopher Alexander. Other touchstones included a maple sugar shanty he once visited as a child, a community of Hobbitlike tiny houses called Trout Gulch built by some tech friends in Santa Cruz, Calif., and a yurt village built by a family in the Adirondacks.

But his pitch was pretty simple, said Courtney Klein, a digital strategist and entrepreneur, who married Mr. Klein at Beaver Brook in 2012. “It was, ‘Let’s get a piece of land and we could bring all our friends together and have a good time.’ ”

And so it began. In August 2010, the couple hosted a weekend of “bonfires, contemplation and wood chopping,” among other activities. They cooked stew in the shack, now called Scott’s Cabin, for Mr. Newkirk, and which Mr. Newkirk had outfitted with a propane stove, and washed up by hauling five-gallon containers from the brook.

Some guests bunked in the shack and sleeping porch; others pitched tents among the ferns. The experience was the model for what would be a kind of weekend commune, an experiment in episodic off-the-grid-living with a core of eight friends that has grown to about 20, including five children (Nell Klein arrived just over a year ago. )

There was Brian Jacobs, a sound designer and composer and Mr. Klein’s former roommate in New York City. He had been a junior Maine guide and his proficiency with an ax served the group well. There was Jace Cooke, a founder of the tech start-up Giphy, and other young creatives — animators, app designers, musicians and filmmakers.

Mr. Jacobs brought Grace Kapin, who worked in fashion, one weekend; having survived that, they are now married and building a cabin there. Before long, everyone became handy with chain saws and other power tools; they brought in more experienced builders to oversee large projects and teach the group carpentry skills. 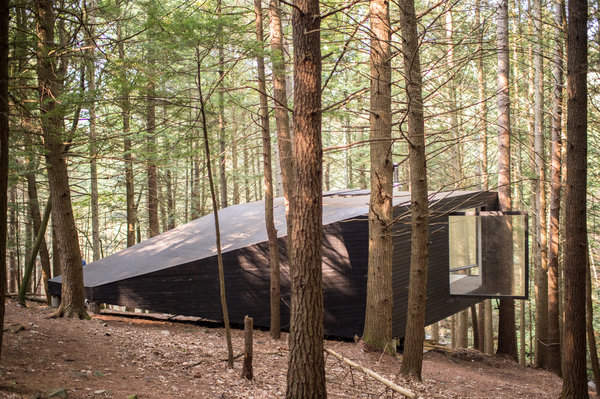 This elegant 350-square-foot cabin is being built by Grace Kapin and Brian Jacobs. It was designed by Mr. Jacobs’s brother, Mike Jacobs | Daniel Krieger for The New York Times

Three years ago, Mr. Klein began inviting artisans like Tom Bonamici, a product designer with an expertise in woodworking and timber framing, to hold annual weeklong workshops at Beaver Brook for paying students to learn building skills. Mr. Klein, whose latest endeavor is DIY, an online “maker” site for children, is keenly interested in turning Beaver Brook into both a folk school and an artists’ residency. 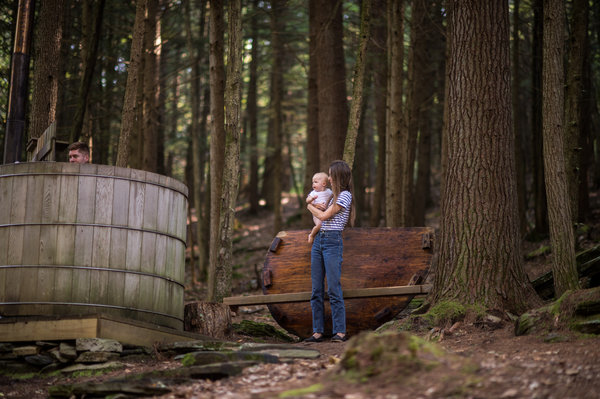 Courtney and Nell Klein at the wooden tub. The first tub Beaver Brook residents built floated away when the brook rose during a spring thaw | Daniel Krieger for The New York Times

After his first workshop, and at Mr. Klein’s urging, Mr. Bonamici, a gentle Oregonian with a passion for traditional Japanese timber framing, became a Beaver Brook resident.

Like all utopias, this one changed as it grew. It was three years ago that the Bunkhouse was built, on a piece of land across the brook with road frontage, electricity and a well. Camping in Scott’s Cabin or in tents strewn about the hill had lost its luster, Mr. Klein said, “People got slower and slower about volunteering to do the dishes on cold nights.” And without power, Beaver Brook’s season was contained to the warmer months.

Yet there is some nostalgia for the time “before,” when there was no cellphone coverage, Wi-Fi or hot water. This year’s Beaver Brook workshop project was timber framing, the foundation for an outdoor kitchen the residents hope will bring some of the action back to the Arcadian side of the brook. Six students paid $500 for Mr. Bonamici’s tutelage; the fee covered a week’s worth of chef-cooked meals and groceries (Mr. Klein and Ms. Klein paid for materials and Mr. Bonamici’s stipend).

On the last night of the workshop, students and residents ate by candlelight among the sturdy framework they’d built. “It was like old times,” Mr. Klein said. 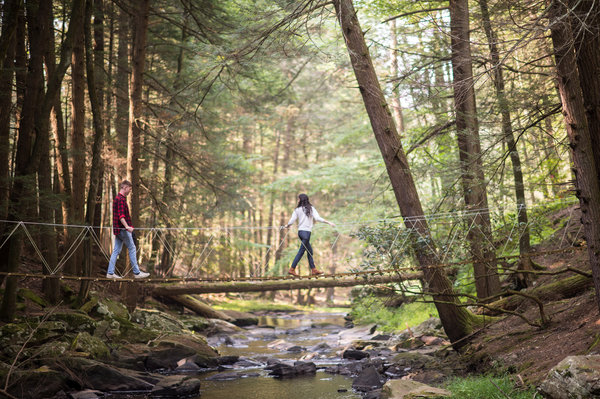 The suspension bridge, with Brian Jacobs and Grace Kapin, connects the bunkhouse side of Beaver Brook to its cabin side | Daniel Krieger for The New York Times

The Bunkhouse, Mr. Klein said, was also bait for a plan he was hatching to draw Ms. Klein, Mr. Jacobs and Ms. Kapin into full-time residency at Beaver Brook. The four discussed buying a local market, perhaps putting a bar in its basement until Ms. Klein put the kibosh on the plan. Continue reading > > >
Via NYTimes | Lead image: Daniel Krieger for The New York Times