Shanna Tellerman wants to help you redecorate your home. She’s not a designer, furniture aficionado, or personal shopper. She’s the founder and CEO of a company called Modsy that rolls all of the aforementioned jobs into one mobile app to make redesigning a room easier (and more fun). Today, the year-old company is announcing the closing of a Series A round of $8 million led by Norwest Venture Partners, putting its total funding at $11.75 million.

What makes Modsy different from the handful of other home design tools out there is that it actually lets users see designs in the context of their own homes—and its renderings are utterly realistic. “Every other major purchase we make in our life, we test first,” Tellerman says. “We test-drive a car or try on clothes beforehand, but we take wild guesses at home and hope they all go together.”

Here’s how it works: Users take a quick quiz to determine their personal design aesthetic. Then they snap a few pictures of the room that needs touching up and send them, along with the room’s dimensions, to the Modsy team. Right now the tool is in closed beta, so this process happens via email, but at launch, it will all take place inside the app itself. Within 48 hours, users get a “lookbook”—a digital mockup of their space redesigned with new furniture and decor to fit their tastes. If a user likes anything they see, they can buy it through Modsy or be redirected to the manufacturer’s website. Products come from a variety of retailers, including Ikea and Restoration Hardware. Modsy gets a commission from every sale.

“It’s super, super simple for the consumer,” Tellerman says. “It’s almost like a personalized catalog of your own home with architectural details that make it look like your actual space.”

Indeed, when I got my lookbook back from Modsy, my first thought was that someone had snuck into my home, swapped out the furniture, taken a few high-res photos, and then put everything back to normal. I also got a 360-degree mobile tour of my new room, which made the experience even more immersive.

The decor the designers picked out for my home was spot on. Modsy decided my style is “modern urbanite,” and that mid-century furniture and minimalist styling makes me tick, which is true. “You are excited by modern design, and drawn toward monochromatic color palettes with pops of color,” the site said. Also true. The prices were reasonable; a big silver lamp was listed at $3,000, but Modsy also gave me two cheaper alternatives for around $300. I was also impressed by the detail—an album I’d framed and stuck on the wall showed up alongside a collage of five others in the new redesign. My husband’s piano and banjo were lovingly placed in the music corner.

My only complaint was that the Modsy team basically copied my current room layout, only substituting new furniture. What I was hoping for was a completely new and creative arrangement. Tellerman says such customization options will be possible at launch for a fee, which I’d probably pay if I were truly looking to redesign. I can imagine spending hours testing new couches and swapping out rugs.

What makes this mockup wizardry possible is a talented pool of employees, many of whom have backgrounds in image processing, film visual effects, and video games. “We’ve been recruiting and building a team that looks more like what you might find in a game or film studio than in a startup,” Tellerman says. Before launching Modsy, Tellerman was a partner with Google Ventures, where she focused on 3-D technologies and the future of retail. 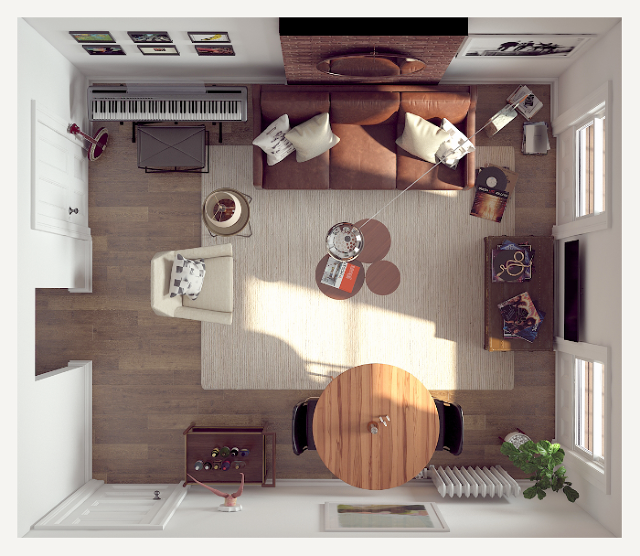 Right now, the design process takes two days, but the goal is for it to be nearly instantaneous. While it’s still in beta, the company is experimenting with different price points. The lookbook is free, but additional customization options like swapping furniture and changing wall colors can be had for $40—a big chunk of change for an in-app purchase, but a complete steal when compared with the cost of hiring an interior designer. If a customer wants to work one-on-one with a Modsy stylist, that’ll cost $150. “We might break it down to something simpler,” she says. “It could be that you pay à la carte for a number of iterations. We just want to keep it really simple, and our whole goal is to make this cost effective for normal people.” Continue reading > > >
via FastCo Design | Photos: courtesy of Jessica Hullinger