The American Copper Buildings, is a tilting, two-towered development on Manhattan’s East Side, featuring a three-story, 100-foot-long skybridge. A Bloomberg photographer had the chance to take the construction elevator up to the buildings’ 29th, and then 49th floors, to get a first look.

The towers, which were designed by SHoP Architects (also known for Brooklyn’s love-it-or-hate-it Barclays Center) and developed by the luxury mega-developer JDS Development Group, will be made up entirely of rental units ranging from studios to three-bedrooms. The distinctive copper cladding is reminiscent of the weathering steel on the Barclays Center, which quickly turned rust-colored. Similarly, the buildings’ copper, currently shiny, will soon age, coloring the buildings a vibrant green; on Tuesday’s visit, the panels that had been on the building longest were already well on their way. 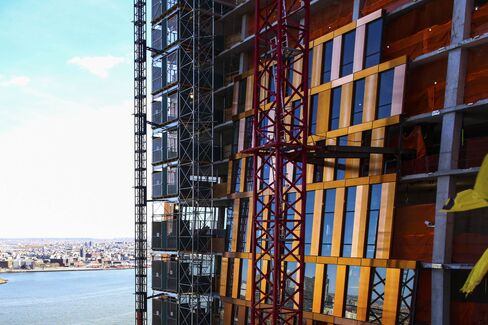 The copper cladding before it ages and turns green.
Photographer: Chris Goodney/Bloomberg

The American Copper Buildings will house 761 rental apartments spread across the two towers, 20 percent of which will be rented as affordable housing; the east tower is 40 stories, the west tower, 49. Residents of both towers will have access to the skybridge, which spans the 27th to 29th floors. 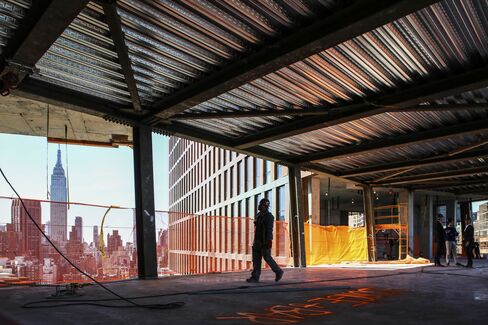 The 29th floor of the skybridge with the Empire State Building in the distance.
Photographer: Chris Goodney/Bloomberg

It’s more apt to think of the bridge as an extension of the buildings’ full-floor amenities on 28 and 29: There’s a vaulted, two-story gym with a rock-climbing wall, a juice bar, a yoga studio, a communal kitchen, a playroom, an art studio, and a marble hammam with a plunge pool.

The skybridge itself, though, is designed to be the showstopper. The architects placed a 75-foot lap pool on the bridge, so residents can swim 300 feet in the air; there will also be a hot tub, a bar, and a lounge with a billiards table. Finally, the top of the skybridge is broken out into three private terraces, accessed by the apartments that flank it from the east and west towers. 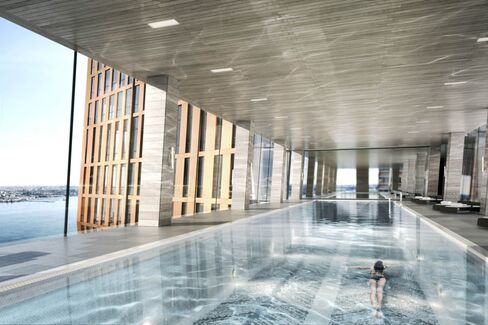 A rendering of the pool area on the skybridge
Source: MARCH

And the skybridge has an added plus: Because the pool takes up only part of the bridge’s bottom floor, the architects were able to tuck many of the east tower’s mechanical systems alongside it; that, in turn, freed up the rooftop of the east tower, to which the developer promptly added an infinity pool and cabanas, also open to all residents. (The infinity pool, located on the 40th floor of the building where views stretch to New York harbor, takes the “infinity” aspect to an extreme. On our hardhat tour we were reminded of Singapore’s Marina Bay Sands, although here it’s on a much smaller scale.) 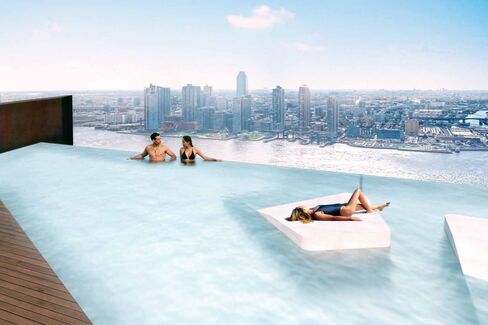 A rendering of the infinity pool.
Source: JDS Development

The buildings are set to be completed in 2017. It’s still too early, the developer says, to talk about apartment prices, but given the amenities, views, pedigreed architect, and the $172 million that JDS paid for the property, it’s safe to assume they won’t be cheap. Check out more photos below. 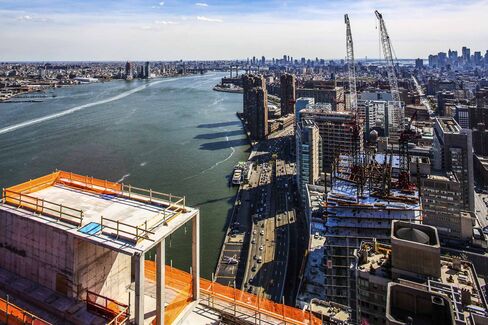 The view from the 49th floor of the East Tower, looking downtown.
Photographer: Chris Goodney/Bloomberg 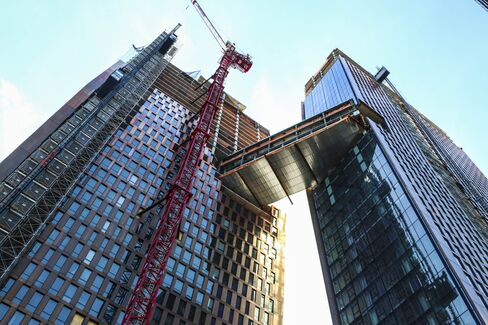 The way the buildings of 626 First Ave curve in is a little dizzying, even from street level.
Photographer: Chris Goodney/Bloomberg 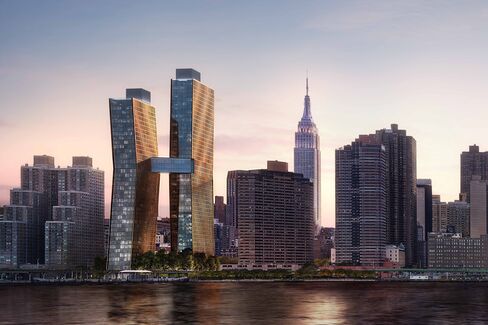 A final rendering of the American Copper Buildings.
Source: MARCH 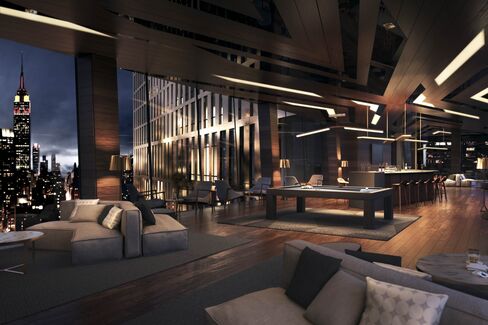 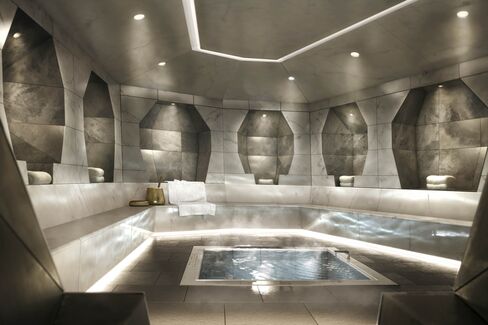 The marble hammam, adjacent to the skybridge.
Source: MARCH 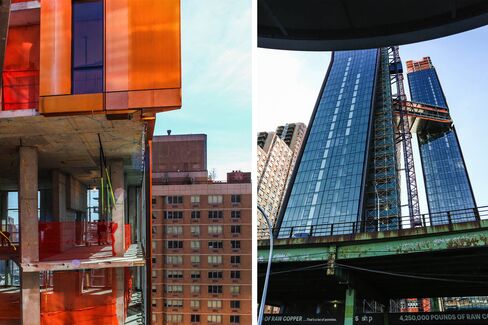 On left: From this vantage point you can see the thickness of the copper cladding. On right: The FDR runs between the buildings and the East River.
Photographer: Chris Goodney/Bloomberg 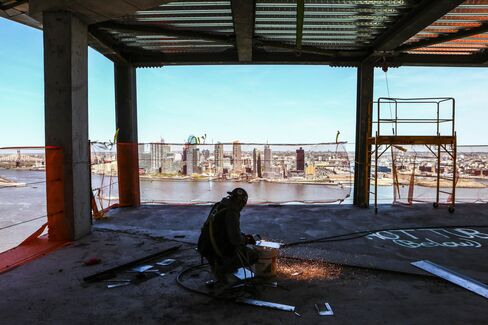 A worker on the unfinished skybridge at the American Copper Buildings with views out to Long Island City, Queens.
Photographer: Chris Goodney/Bloomberg
via Bloomberg